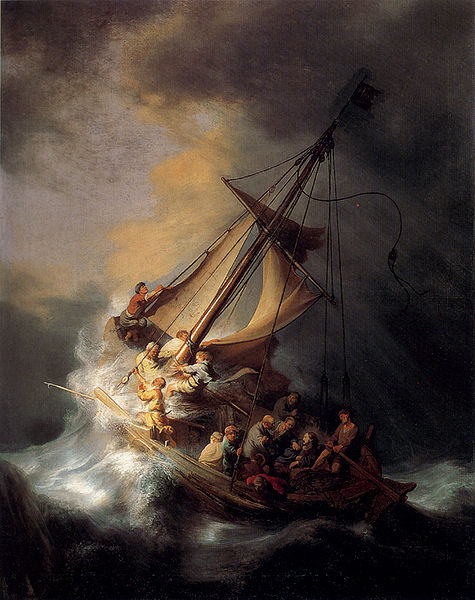 ‘Peace, be still,'
He said;  no more.
The obedience was instantaneous.  The wind ceased; there was a dead calm on the surface of the water.  The battered sails hung listlessly above the masts;  the boat rocked gently up and down, to and fro and from side to side, staying where it was, as if it rested after a heavy struggle.  The men crouched still beside Him; for the moment they were paralysed.  They had come to Him expecting succour. If only He were awake among them they had felt they would be safe,  but they had never expected anything like this.  They had feared the storm, but now fear of a new kind crept over them.  They did not know what to say or think.
Meanwhile Jesus looked down upon them where He stood.  They did not yet recognise what He had done.  He had worked this wonder, not for the multitude, but for His own, His Twelve.  He had worked it in their own vessel, where He was always with them. He had worked it under conditions which, by all the laws of nature, were hopeless.  He had worked this wonder, and He had worked it for them; why did they not see?  But the time would come when they would.  If that day He had begun to speak to the people in parables, that night He had begun to act in parables to them.  One day they would read its meaning and would know that so long as He was with them in the boat, not till the end of time would any storm, would the gates of hell itself, be able to prevail against them.
All this they would one day understand,  but at present they were only little children.  They had much yet to learn, and as little children He must continue to teach them, now drawing them gently on, now with seeming sternness urging them.  He would seize this moment for the latter.  True they had been in trouble and come to Him; true they had appealed to Him for help.  All this showed faith, and He loved them and in His heart thanked them for it.  But He wanted more, He for ever wanted more, and not till He got that more could He be content.  So He would rebuke them; gently He would urge them; He would stir them to things yet greater, to faith that would ride over every storm.  He said:
‘Why are ye fearful
O ye of little faith?
Have you not faith in you yet?
Where is your faith?’
The men awoke from their paralysis.  The boat was still, and if they would reach Gerasa by morning they must take to their oars.  He seemed not to need them any more,  He wished them to return to their labour.  They stepped down the deck and settled to their tasks, each man in his place.  But as the boat began again to move forward, as the late moon rose above the hills and streaked the waves with silver, they would whisper in awe to one another:
‘What manner of man is this?
Who is this, think you,
That he commandeth both the winds and the sea
And they obey him?
It was indeed another discovery, a new revelation of this Man who had already won their hearts and their allegiance. It would not now be long before they would find for themselves a full answer to their question, even on the very spot where they were then sailing, and under not unlike conditions.’
From - ‘The Public Life of Our Lord Jesus Christ’ - An Interpretation.  By Archbishop Goodier S.J.  Published by Burns, Oates & Washbourne 1934
(‘The Storm at Sea’ – ref. Mathew VIII, 18, 23-27; Mark IV, 35-41; Luke VIII, 22-25.)
at July 31, 2011 No comments:

Email ThisBlogThis!Share to TwitterShare to FacebookShare to Pinterest
Labels: Storm at Sea

'Garden of the Soul' by Bishop R. Challoner - a Spiritual Gem 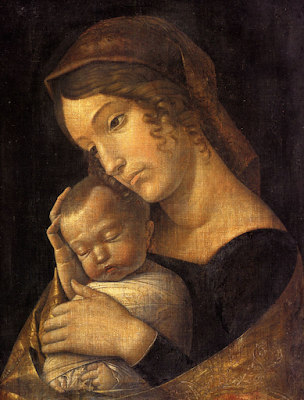